Jersey City, NJ - Hoop There It Is is certain to be one of the top teams this season, as they love to put on a show and tonight was no different. Indy 500 stepped on the court feeling very confident after last week’s win and were ready to battle. The first half was very competitive, the score stayed close with Hoop There It Is leading by no more than 7. Both teams communicated on every play and searched for the best shot selection. Hoop There It Is was missing 2 of their top players and had no substitutions, but that didn’t slow them down at all. Three players specifically were on fire including Gary Hettinger and Eric Adams of Hoop There It Is and Greg Giordeeno of Indy 500. Greg scored 12 points, Eric had 11 points and Gary added 12 points as Hoop There It Is led at halftime 30-23.

Tempo remained high to begin the second half and both teams were playing strong defense. Greg Giordeeno's hot streak continued, but he didn’t get much help at all from his teammates. Hoop There It Is started getting stops and executing plays on the other end to force the lead to 22. All 5 players on Hoop There It Is stepped up this half as the game turned into a mercy. They led by as many as 27, outscoring their opponent 46-20 and there was no chance of an Indy 500 comeback. Hoop There It Is won the game in a blowout 76-43. 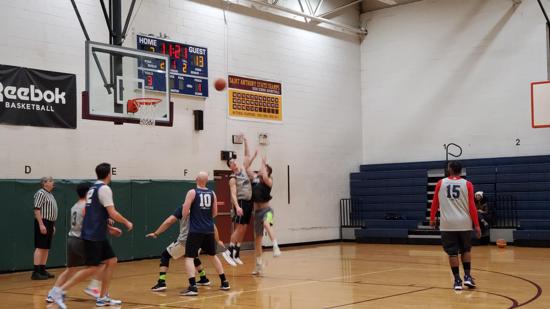