Tigers Call it a Comeback

ACADEMY CHARTER H.S. -- The Flint Tropics and Tigers game this past Sunday night was an instant classic, and is the early season favorite for game of the year.

Led by Drew Scott’s 12 first half points, the Tropics jumped out to an early advantage and held a halftime lead of 26-15. The Tigers were playing tight and couldn’t find a rhythm.

But a funny thing happened early in the second half. Da’Qwan Brown nailed a three and brought the fans to their feet. And like that, the Tiger defense took over. 2 steals from John Sidway, 3 from Rod Carter and 4 from Player of the Week, Jermaine Jackson. Jackson took the game over scoring 16 of his game high 28 in the second half.

The Tigers improve to 2-0 on the season and are all alone in first place. Their next game will be against the Scorpions. Meanwhile, the Tropics fall to 0-2. 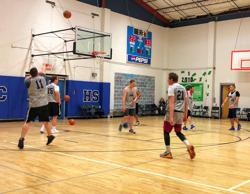 In the nightcap we got our first look at the Scorpions as they took on the Splash Bandicoot.

The Scorpions got a great game out of Padraic Brady (22 pts, 8 rebs) but it was not enough. The Bandicoot were splashing.

Doug Boors double double (11pts, 14rebs), 5 triples from Robert Greene and 6 more from Ryan Marasco were too much for the Scorpions- the Splash cruised to a 71-45 win.

The win brings the SB crew to 1-1 on the season and if they shoot like that, they’re gonna be a problem for the rest of the league.  The 0-1 Scorpions are going to have their hands full when they take on the Tigers next week.