JERSEY SHORE LEAGUE -- (From Last Week) - Week 5 started off with a bang. Literally. Player of the Week Dinger Dave C of the undefeated Hot Behinds smashed his weekly tape measure home run in the top of the first to get the action underway. A quick 2-zip lead and this one looked like it was destined to be a blow out. But a funny thing happened for the winless Backyard Brew Crew. The usual pinpoint control of HB pitcher Frank (7ip, 6 bb) wasn’t there on this night. After a leadoff single from Mike (3-4) the BBC showed great patience at the plate and when Adam (3-4) and Janine (2-4, 2rbi) singled in 3 runs in the bottom of the first, we had a game on our hands.

Each team had 14 hits and traded runs in this back and forth match. Yac delivered the big blow in the top of the 5th with a bases loaded double that opened up a 4 run lead. But the BBC kept fighting. Led by their quartet of hittin ladies, Jill, Jacy, Janine and Mel, this isn’t the same old Brew Crew. They answered right back with 4 of their own in the bottom of the 5th. Tie game going to the 6th and things started getting very interesting.

With Brew Crew pitcher Justin working his off speed to perfection all night, hits were starting to get harder to come by. But with one out in the top of the 6th, HB catcher Stacey worked out a walk. That led to hits from Tony G, Casey and Tom P. The Hot Behinds were back ahead by a pair. Could they seal the deal?

Jill, Andrew and Kevin all singled to start the bottom of the 6th. Now with bases loaded and the tying run in scoring position you could feel the tension mounting. Frank settled down and induced a couple of infield pop ups and a grounder and was able to escape the jam only allowing one run.

The Hot Behinds scraped one more across in the 7th and were able to get a 1-2-3 bottom to hold on for the 11-9 win. It kept the Hot Behinds undefeated and alone in first place. But more importantly it was far and away the best showing this Backyard Brew Crew squad has had. With the pieces starting to fall in the right place this team looks like they could play spoiler the rest of this season and will definitely be a team that should compete for a playoff spot come spring.

The Misfits got 3 hits apiece from Carmine, Riyann and Tommy to hold off Your Mas Your Da for a 5-4 victory. The win keeps the Misfits undefeated and a half game back of the Hot Behinds for the coveted one seed.

The nightcap featured perennial powerhouse Bada Bing and the upstart Clown Punchers. These two played to a 5-5 tie a couple weeks back so this one had the makings of another epic showdown.   Problem is, only one team got the memo. Bada Bing banged 22 base hits in this one. Mike was 4-4, Brett and Sal each had 3 hits. And Vic had 3 hits including a towering solo bomb in the top of the third. It was over, 13-2 Bing.

Week 6 has some exciting matchups ahead, including a 7pm Hot Behind- Misfits game that will be a battle for first place. It should be an exciting race to the pennant. 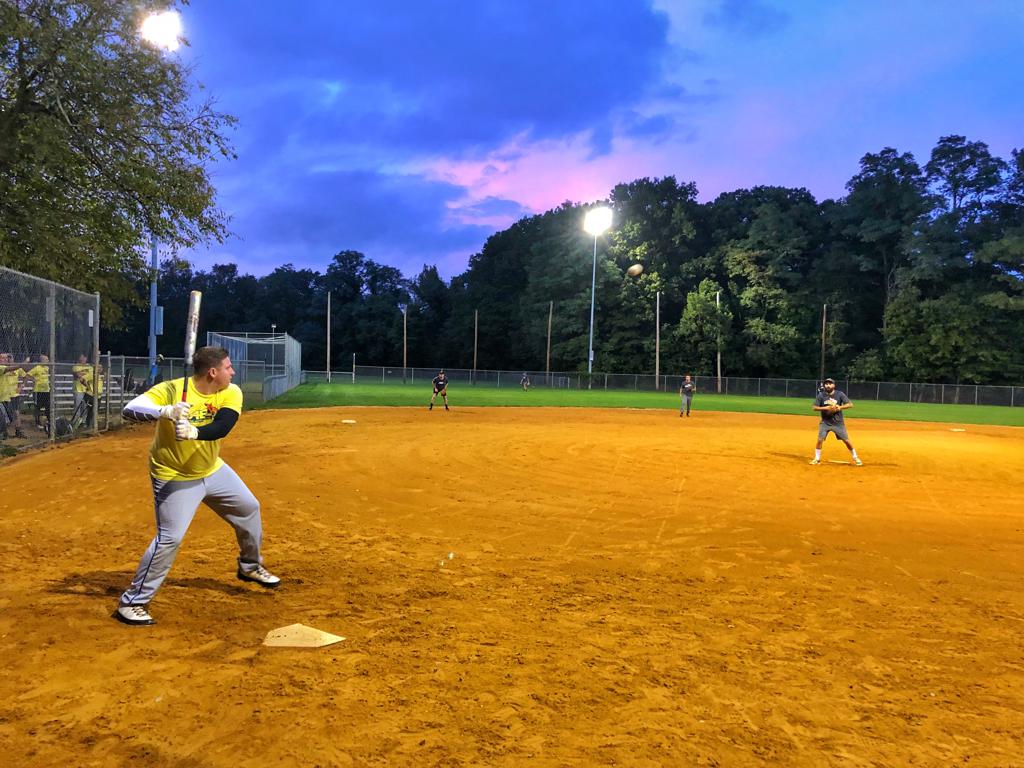