Lamb to the Slaughter

Undefeated no more! Juggernaut Bucket SZN taken down by Slaughterhouse in epic fashion to seize the league championship!

Jersey City- The two top dogs of the league duked it out in an instant classic of a championship game this past Sunday. Both of teams wanted the title badly, and it showed on the court. Slaughterhouse hit the ground running, nailing their first two shot attempts. Both came from deep to start the game on a 6-0 run. Bucket SZN responded like a champion and countered with an impressive 15-0 run, taking a 9-point lead. Slaughterhouse was not defending the 3-point line well enough and gave up 2 uncontested 3’s. After the quick start, Slaughterhouse went ice cold from the field for over 9 minutes. The game was fast-paced and physical. Slaughterhouse found the spark they needed and mounted a 12-2 run to regain the lead. From then on, the game would be tight and competitive. Slaughterhouse moved the ball well but missed a too many free throws while Bucket SZN won the battle of the boards. Going into halftime, the score was all knotted up at 26 all, with Nnamdi Enechionyia of Slaughterhouse leading all players with 16 points.

As great as the first half was, the second half didn't miss a beat. The teams were even more physical with multiple technical fouls being handed out, showing just how much this one meant to each team. Slaughterhouse’s defense was tougher, but neither team was able to break away offensively. Bucket SZN saw a huge advantage on the offensive boards, allowing them to keep pace with their opponent. The game was neck-and-neck down the stretch, when Slaughterhouse’s Brandon Steward came up with 2 game-changing steals in the final 2 minutes to put his team in the driver’s seat. Bucket SZN tried to recover from those big blows to salvage their flawless season and the championship. However, this night belonged to Slaughterhouse as they were able to hold the lead and take down their undefeated opponent, earning the championship title in thrilling fashion with a 48-43 victory. Bucket SZN’s Vic Rosario finished with another double-double of 12 points and 12 rebounds, also adding 1 block. Teammate Aaron Gadsden chipped in 12 points of his own and 3 steals. Slaughterhouse’s Nnamdi Enechionyia led the way with 19 points, 4 rebounds, 1 assist, 1 steal, and 1 block, while Brandon Steward stepped, who seems to have a knack for stepping up in the big moments, totaled 9 points, 4 assists, 4 steals, 2 rebounds, and 1 block.

Slaughterhouse came into the league this season and took it by storm with their impressive 3-point shooting, ball distribution, tempo, and chemistry. They were a top team throughout and proved their championship mettle. Nnamdi Enechionyia led the team in points per game at 17.0, 3-pointers made, total points, blocks, and rebounds this season in their path to the championship. Now that’s epic. Brandon Steward put his passing skills on full display, totaling the highest assists per game in the entire league at 5.4, and no one else even came close. He complimented his ball handling and prowess in distributing the ball with his stout defense, also lead his team in steals. Although their top seeded opponent outranked them in most categories this season, Slaughterhouse proved why they were so dangerous and worthy of the championship crown throughout the season and in this game. Congratulations for the well-deserved victory and living up to their name Slaughterhouse!!! 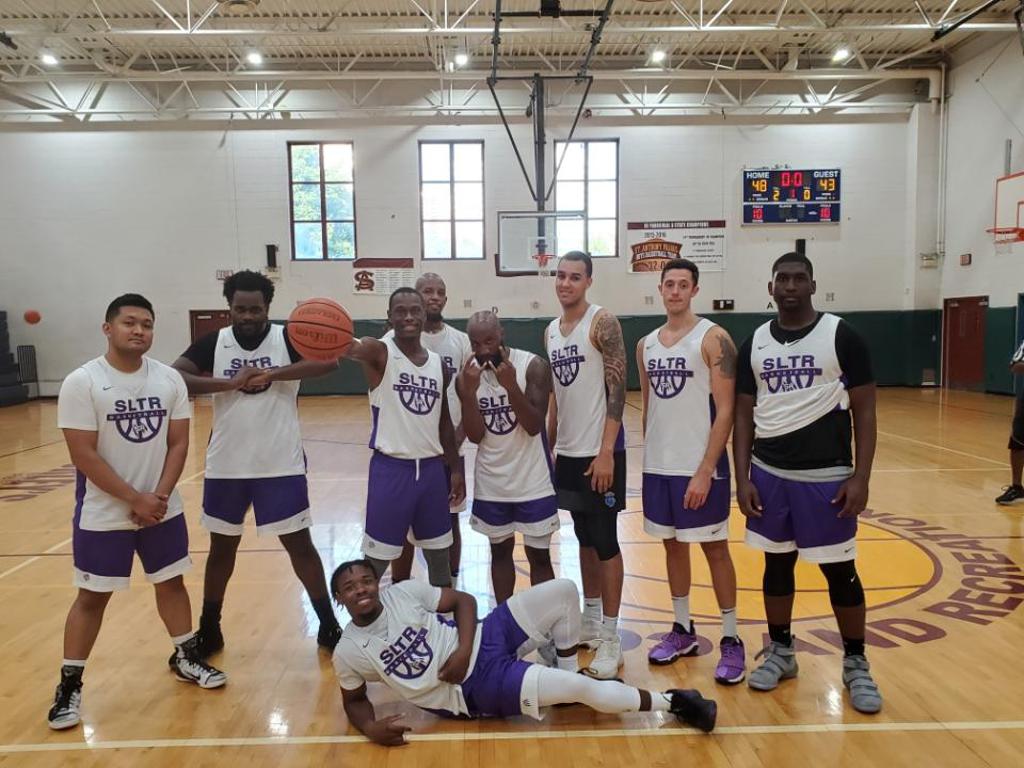